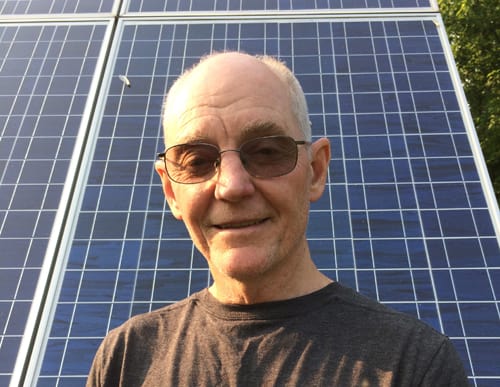 The Green New Deal, why do we need it?  An Engineer’s Perspective
given by Tony Noerpel, founder of Sustainable Loudoun.

Speaker Bio:
Tony Noerpel retired in 2016 after a long career as a research engineer and inventor with Bell laboratories and Hughes Network Systems designing state of the art satellite communications systems and other communications technologies. He has 44 patents and over seventy technical publications, including book chapters and journal articles. He is a member of Sigma Xi, the national research honor society. Tony also founded Sustainable Loudoun in 2005 to educate and advocate for responsibility and stewardship in Loudoun County, VA. He writes a column on energy, the economy and the environment in the Blue Ridge Leader, https://blueridgeleader.com/category/columns/sustainable-planet/ . He joined the Chesapeake Climate Action Network Board in 2008.

The Presentation:
Tony was able to boil down climate change science and its integration with economic theory into why we need a Green New Deal.  Below is a very simplistic explanation of his talk.

A thriving economy is driven by energy, energy to transport items to market, transport people, energy to produce packaging, package a product, etc.  Currently most of the energy that drives our economy in the U.S. at least, is through fossil fuels.  Fossil fuels are a double edged sword, not only is it an economic driver, but fossil fuels also produce waste and its that waste that’s driving the warming of our planet, and hence causing our climate to change, overloading the Earth’s inherent eco-systems (solid – earth’s crust, liquid -seas, rivers, etc and gaseous – the air that we breathe).

In slide 7 – Wild Mammal Biomass is the weight (actually the mass) of the carbon content of all living wild mammals. It excludes the weight of humans and our livestock.

In slide 11, BAU = Business as Usual;  SDS = Sustainable Development Scenario;  NPS = New Policies Scenario;  These are projections of fossil fuel emissions up to 2040.

In slide 13, why we need a Green New Deal, is so that it can address the constraints we have, environmental, human, economic and energy. 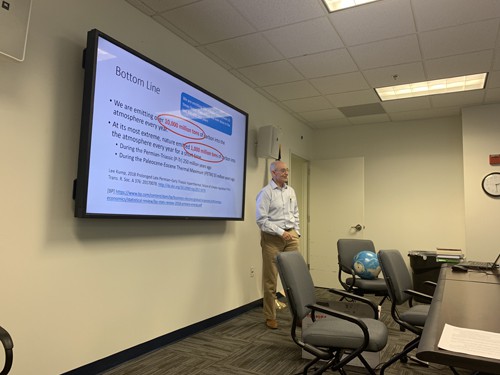 The Sierra Club puts the Green New Deal as:  “A Green New Deal is not a single law, but a suite of economic policies to deliver better job opportunities, less climate pollution, cleaner air and water, and more resilient communities.”

Many, many thank-yous to Tony Noerpel for speaking to us on Thursday August 22nd!

Below is Tony’s PowerPoint used during his talk.