Many Thank-Yous to our September Speakers! 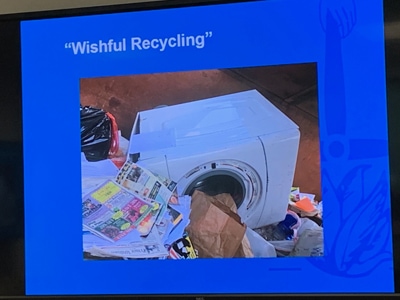 Encouraging businesses and individuals to recycle not only helps the environment, but 1000s of people who are employed in it.  Make it easy on them at the sorting plants by leaving all the containers and packages loose in your bin, no plastic bags!

Mr. MacDonald and Mr. Hayes gave us a great overview of the recycling industry itself, how businesses and individuals can help it and resources for further information.

Note:  Information below applies mostly to residential use in Prince William County except where noted, but always check with your service provider if in doubt.

The recycling industry is mostly private and is a significant part of Virginia’s economy.  There are over 8000 people in Virginia who work in this industry which has an economic impact of well over 1B$!  The industry itself is in a state of change, partly due to policy changes from foreign countries and limitations of our own infrastructure.

Some of the materials, e.g., cardboard, cans, plastics are commodities, once sorted and baled are sold on the open market.  Recently, China instituted policies restricting or banning materials that previously had been accepted, which impacts our own recycling industry here in the states.  The most noticeable change to end consumers in Prince William and Fairfax Counties is that glass is no longer accepted at the curbside.  These two counties now handle glass separately which can be taken to a purple bin at a local landfill.

The changes in the industry are forcing changes on what can and can’t be recycled.  The goal for our recycling industry here, is to have “clean loads”.  Single-stream recycling was/is a huge convenience, but now with the demand for cleaner loads from buyers, separating glass from the stream, is a step in that direction.

In Prince William and Fairfax Counties, the biggest and most recent change is that glass containers can no longer be included in your recyclables.  They break easily and make it difficult to get clean “loads”.

If in doubt throw it out, avoid “wishful recycling” 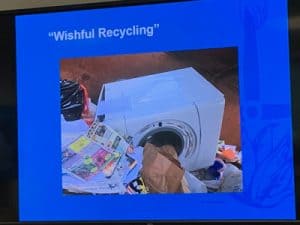 Wishful recycling – someone hoped this washing machine was recyclable.

Batteries don’t go in with your normal recyclables.  Laptop batteries can potentially cause a fire and have caused fires in the dump trucks and should be taken to the landfill or a place like Lowes or Home Depot.  “Button batteries” have cadmium and are considered hazardous waste. 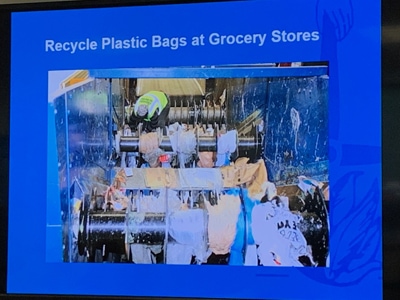 Jammed Sorter because of plastic bags.  In this picture, they actually have to stop the machine, and people have to physically go into the sorter and undo the plastic bags from the spindles.

The triangles we see on the bottoms of plastic containers, where there are numbers 1-7 were developed by the Society of Plastics Engineers and is an index for the type of plastic the container is.  Today, Prince William County is only accepting #1 and #2 containers, e.g., detergent containers, water bottles, etc.  In the picture below, Scott is showing that the plastics on the right are the ones that can be recycled.  Things like Yogurt containers, the Red drink cups, etc., aren’t allowed. 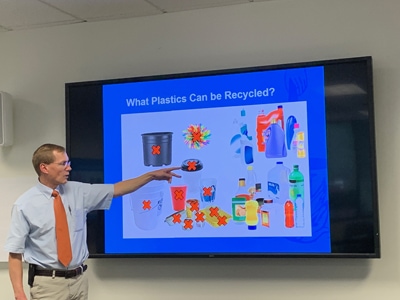 How2Recycle is an organization that is working towards standardizing recycling labels, to make it a lot easier for the end user on how to recycle a material.  Below left is an example of a new style label for a plastic bottle that is starting to be used. The picture on the right is from How2Recycle’s website showing their labeling system. 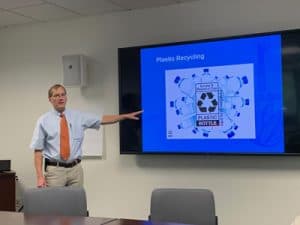 Tony Hayes of Loudoun County, gave us some cool stats on recycling in Loudoun County – one truckload of trash is approximately equal to 15 Tons!  Loudoun County is also pushing for a permanent electronics recycling facility, but right now in the Northern Virginia area, electronics can be taken to Securis, Forever Green Recycling and C2 Management. 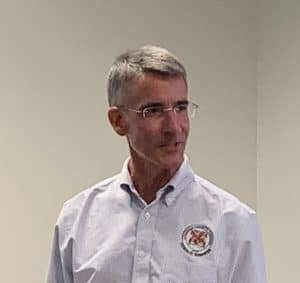